Way back in 2000 i bought my kid sister a Sony PlayStation.. I have never been a big gamer (not since arcade games when i was tiny) but a reliable source at work convinced me to play Metal Gear – Solid. The game was awesome and for the period i played it, it dominated my life.. im not a gamer so probably not qualified to use words like gameplay but found the game incredibly intuitive and seldom ever found it “gamey”.

(in truth i did discover one spot where entering a bathroom seemed to reset a set of events chronologically.. but other than that it was clean)

I was mildly amazed at how each stage seemed impossible to pass till you did, and was then super amazed at the times the oponents handled non standard behavior (running into a truck when being chased by a small army.. (most ppl run away).. guards take a look and casually toss in a grenade..)

Then came stuff like sniping.. the PlayStation had forcefeedback controllers, and at some point you get taken out by some sniper from miles away.. u eventually get a sniper rifle but your pulse/heart-rate keeps messing up your shot (this is done physically through the joystick). The solution? you need to find diazapam to inject yourself to lower your heart rate.. (part of the reason i loved the game is that if you were OCD enough, you coulda never learnt about diazapam and actually mastered shooting between pulses)

What was super cool at the time tho, was one opponent who seemed to read your every move.. he went on about reading your mind inbetween laughter and kicking your ass.. Eventually google revealed that defeating him required unplugging your controller and plugging it into a new port, since he was reading that one.. cute!

A recent check on Piotr Banias blog reveals that modern Metal Gear has kept up this tradition.. 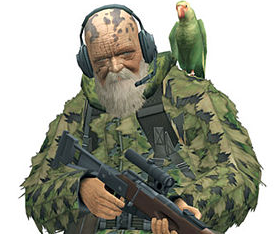 After getting seriously injured (few times), i’ve googled for some hints. And firsty i couldn’t belive. This boss is really old, even his parrot names him as Grandpa, so the hint uses this fact very directly. In order to pass him away (one of the ways) you need to save your game, reset your console, change the system date (one week forward) and reload the save. And guess what, when you reload it The End will simply die because of an old age. For me that was a really, really incredible game plot, holy cow. I havent seen such thing yet.

awesome.. ive tried playing games since metal gear but lose interest pretty quickly.. which is probably a good thing.. it almost ruined me the last time…