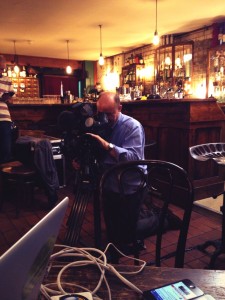 For the last year, Glenn and I have been obsessed with our phones; especially with regard to the data being leaked by a  device that is always with you, powered on and often provided with a fast Internet connection. From this obsession, the Snoopy framework was born and released.

After 44con this year, Channel 4 contacted us to be part of a new experimental show named ‘Data Baby‘, whose main goal is to grab ideas from the security community, and transform them into an easy-to-understand concept screened to the public during the 7 o’clock news.

Their request was simple: Show us the real threat!

To fulfil their request, we setup Snoopy to intercept, profile and access data from a group of “victim” students at a location in Central London. While this is something we’ve done extensively over the past twelve months, we’ve never had to do it with a television crew and cameras watching your every move!

The venue, Evans and Peel Detective Agency, added to the sinister vibe with their offices literally located underground. We were set up in a secret room behind a book case like friggin spies and got the drones ready for action. As the students arrived, we had a single hour to harvest as much information as we could. Using Snoopy, Maltego and a whole lot of frantic clicks and typing (hacking under stress is not easy), we were filmed gaining access to their inbox’s and other personal information.

In the end, Snoopy and Maltego delivered the goods and Glenn added a little charm for the ladies.

After the segment was aired, we participated in a live Twitter Q&A session with viewers (so, so many viewers, we had to tag in others to help reply to all the tweets) and gave advice on how they could prevent themselves from being the next victim. Our advice to them, and indeed anyone else concerned is:

How to avoid falling foul of mobile phone snooping
– Be discerning about when you switch Wi-Fi on
– Check which Wi-Fi network you’re connecting to; if you’re connecting to Starbucks when you’re nowhere near a branch, something’s wrong
– Download the latest updates for your phone’s operating system, and keep the apps updated too
– Check your application providers (like e-mail) security settings to make sure all your email traffic is “encrypted”, not just the login process
– Tell your phone to forget networks once you’re done with them, and be careful about joining “open” aka “unencrypted” networks